Another “regular guy” wants to be a superhero. Will this trend ever end? 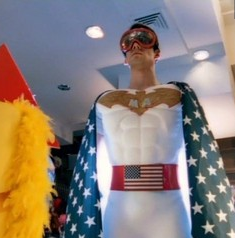 “In this heart-warming family comedy, average accountant, Dennis Sullivan, is assigned to the account of a young widow and her son, a boy fascinated with a TV hero known as “Man America”. Taking an instant shine to the kid, Dennis visits The Imagination Superstore, where he tries on the ‘Man America’ costume. When he leaps from the dressing room to thwart a robbery, he embarks on a journey more complex than he ever could’ve imagined.”

I’ve already shared a list of six “regular guy superhero” movies, from Kickass to Zebraman. And the list just gets longer …

Somebody’s Hero, the latest entry in this burgeoning sub-genre, had its premiere at the 2011 Newport Beach Film Festival.

The premier of “Somebody’s Hero” on Sunday at the Triangle Square Theatre in Costa Mesa, California, introduced many to the talents of independent filmmaker Darin Beckstead who entertained the audience with this engaging and soulful tale of courage-through-loss, exfoliating the inner child in all as he led viewers on a journey through his heartwarming and poignant, romantic comedy that the whole family can enjoy.
– Yahoo

We are happy, of course, to see this trend maintaining its momentum, as our own script, Grampa Was A Superhero, is still in development with Epiphany Productions.

“Grampa thinks he’s a TV super hero, and drags his grandson on a cross-country road trip to confront his imaginary arch enemy… accidentally thwarting crimes along the way and fast becoming a folk hero.”