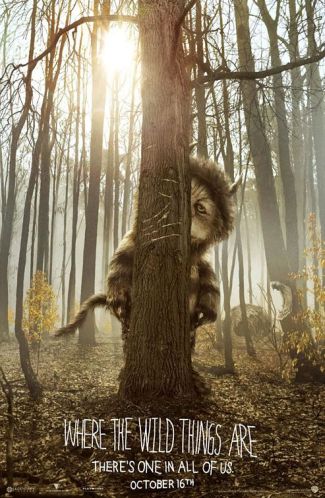 Where The Wild Things Are – a disappointing imbalance of dramatic and thematic intent.

I knew going in. I’d heard the reports, seen the reviews, and I knew.

“But it’s a kid’s book,” I’d say. “It’s about a boy who imagines a land with friendly monsters. How can that not be for kids?”

But in my mind I thought maybe at least it would be an interesting adult take on a kid’s story. And it was a tossup between WTWTA and Jim Carrey’s new 3D Scrooge extravaganza from the people who brought you the robotic and unengaging Polar Express. So I opted for WTWTA.

Ah, but they were right. And I was wrong. And here’s why.

Man, this film looks great. It’s a strange, gritty, naturalistic combination of fantastic costuming and puppetry from Henson’s Muppet Shop, sweetened with CGI to bring character and expression to the creatures that in-camera animatronics just couldn’t do (Interestingly, this wasn’t originally the plan… the CGI was a “save” for an otherwise poorly performing first draft).

The result is a cast of big, fantastic, surreal monsters that at once look every bit like the Sendak illustrations writ real, with moist mouths and shiny eyes and sad, subtle expressions that let you completely forget that they’re giant costumes brought to life by a couple dozen operators each. There is actually subtext in the faces of Carol, Judith, Alexandra, Douglas and The Bull. And that allows you to completely suspend your disbelief and immerse yourself in the world on the screen.

Add to that the amazing production design by K.K. Barrett, and the gritty, hand held documentary realism of the camera work, and you’ve got an interesting, quirky, engaging and immersing visual treat that’s quite unexpected and unique, particularly for a kid’s fantasy movie.

And all the performances, even Max Records, the newcomer who plays the young boy with the big imagination, gives a fine turn even if the character he’s saddled with is less than likable.

Max is a brat, who disrespects his Mom and his sister and acts like a spoiled, self-absorbed child. When he arrives on the island of the Wild Things, he discovers that they are essentially a tribe of argumentative, spoiled, jealous, giant child creatures. He finds himself reflected in them, and as their new King ends up learning how hard it is to have so much responsibility for the happiness of those around you, and yet to be so unappreciated. (Get it? He’s like his Mom, see?)

Okay, we get it. Every time the whiney wild things argue, and pout, and complain, Max has to step in and learn a little.

Okay, we get it. It happened again.

There’s no complexity to the story, once the thematic conceit is set up. That’s as complicated as it gets. Which is about as complicated as the book got, in all of its ten or so lines of text. And about halfway through I started getting bored, feeling like I’d spent the last 45 minutes reading the little book over and over and over, waiting for something more to happen.

As a screenwriter, maybe I’m overly fixated on story, but I’m constantly appalled by the utter lack of story in so much kid’s fodder (watched the D2DVD Space Buddies recently – no attempt at a story there at all). There are events, that happen in some kind of order, that ape the milestones of stories without really becoming stories themselves. And that’s kind of what happens here.

Max discovers a pile of human-like bones, and fears that they are the remains of previous Kings (the Wild Things deny this, but in a way that you know is a lie — and later they admit he’s the first King they didn’t eat). Later, in a fit of violent rage, one Wild Thing tears the arm off another (something that looks like sawdust pours out — is he truly a stuffed animal?) and his arm is replaced with a snowman’s twig of an arm. Supposed to be funny, I guess, but it sent my 8 year old into a sobbing fit.

Likewise a dirt clod fight devolves into a raging clobber fest that leaves one Wild Thing with a bloody gash in his head (are they stuffed animals? I don’t know any more…) and another creature knocks beautiful owls out of the sky with rocks (“They like it when I do that” she says).

And finally, Max has to crawl inside one Wild Thing (she’s slimy and fleshy inside – not a stuffed animal after all) to hide from another, angry Wild Thing who is chasing him crashing through the underbrush in a hell-bent effort to eat him alive.

It’s an oddly simplistic and childlike theme for such a dark and adult series of events that never evolves into a story.

WTWTA seems to not quite know what kind of movie it is, or who it’s for (such a common ailment). Someone seemed to think that it was best to aim for the adults who grew up with the book, and assumed that they’d want a grown-up take on the story to suit their new grown-up sensibilities. Someone else seemed to want to make a film for kids around 9 or 10. Records was about that age during shooting, and looks just a little silly in the wolf outfit (I always envisioned Max as about 5-6). Nobody seemed interested in making a movie that was aimed at the target audience of the book itself, small children under 6 with fantasies about giant talking stuffed animals… who would likely be the kids or grandkids of those of us who grew up with the book in our childhood, and would be paying for the movie.

Now of course I didn’t see the early versions of the film, and can’t speak to what complexities the story might originally have had. But the version in theaters ended up with not enough story to satisfy adults (not this one, at least), while unfortunately retaining the adult tone that makes it inappropriate for its younger audience.

It’s a storyteller’s responsibility to balance theme, tone and story. I’ve written in the past about the Dramatic Imperative of a story, and its relationship to its Thematic Imperative. I’ll have to dig up that old essay, and re-investigate it here sometime soon.

But WTWTA is a great example of what happens when those elements are sadly out of balance, whatever the cause or intent.

See it for the production design. But leave the sound off and play “Dark Side Of The Moon” instead.

Or go see Jim Carrey get hit in the crotch with an icicle.

7 thoughts on “where the wild things are – review”