Why too much detail destroys screenplay description – and pisses readers off

I just finished slogging my way through another script as a judge for a screenplay competition.

Yes, slogging. It was painful. It was boring. Frankly, I couldn’t finish it. I gave it a “pass”.

Because the writer gave me too much description. 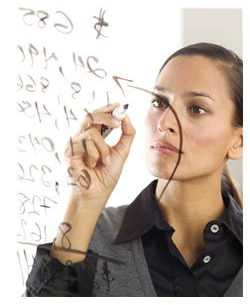 The screenwriter told us just how many steps a character took to cross a room (11), whether the couch was on the right or the left of the doorway (left), how many seconds a dog barked (5), and precisely how much space is between the lights in an alleyway (30 meters). I learned that the kitchen table is rectangular, and how big it is (approximately 33 inches by 60 inches).

I wanted to shoot myself in the head. For the record, this is not how you want to make your reader feel.

Perhaps because this was a sci-fi script, the writer fell victim to the classic hyperspecificity of Golden Age authors like Arthur Clarke (whose penchant for detailing the precise number of rivets in a spaceship might make for good geekery, but doesn’t make for good Literature [opinion] or screenwriting [fact]).

But consider this: even between the covers of a sci-fi bestseller, there’s such a thing as too many words. Too much specific description. Too much time spent on details that are not story critical, and that actually disrupt the rhythm and pacing of the read.

Once, many years ago, I had brunch with acclaimed sci-fi writer Larry Niven, and he shared a story about the writing of the bestseller Ringworld. He said that he spent days writing about a detailed and lavish banquet. Every exotic food, roasted creature, colorful fruit, bizarre drink, strange and alien utensil. He loved it, and was so proud of it.

Then he  turned it over to his sometime writing partner Jerry Pournelle for some honest feedback. Jerry, he said, was a ruthless editor. Jerry reduced the scene down to two words:

Larry laughed. He said Jerry was right. He didn’t need it. He had to kill his baby.

But I see the movie in my head

I know, I know. The writer saw the movie in her head and needed to share it. Every moment was crystal, the dramatic void of silence as the protagonist thoughtfully crossed the room was critical to pacing and mood. I get that.

I get why the lights were 30 meters apart, I do … because that vision of a black alleyway punctuated with pools of yellow light was mysterious.

So say that. In that minimalist syllable-counting haiku that is (or should be) screenwriting. In the way that makes every word count. In a way that’s artful. In a way that doesn’t suck the life out of it, and devolve into a soul-less mechanical blueprint for the set designer.

In a way that doesn’t make the reader (and that’s your audience) roll his eyes and shut your script on page four after you’ve pulled him out of the story because you can’t get to the fucking point.

And no, it won’t be easy. That’s why not just anyone can do this. As I said in Writing Screenplay Description with Personal Style:

… it’s a tricky balance… Style (with a capital “S”) can’t supersede the screenwriting tenet of direct simplicity.  It’s an interesting challenge, to introduce enough of your Style to create a personal voice, while avoiding the hyper-specificity of extraneous detail that slows down the real-time pace, and readers hate.

It’s not your job

It’s not your job to choose camera angles, or block the action.

It’s not your job to direct.

Yes, sometimes, it is story critical to drop in a hyper-specific detail like “the couch was on the left”. If you’re writing Memento, or Eternal Sunshine of the Spotless Mind, or Run, Lola, Run, those details may resurface, and make themselves important to the story.

But as a reader, let me say this: If you specify that the couch is on the left, or that he takes 11 steps across the room, or the dog barks for 5 seconds, those details damn well better be story points. ‘Cuz I’m going to be waiting for them to justify themselves in some important way.

And if they don’t, I will fucking toss your script.

I got the feeling, reading this painful script, that maybe what the writer really wanted to do was write a sci-fi novel.

Then write a novel. Seriously. Maybe that’s what you excel at … maybe that’s what really stokes your creative embers. Maybe sorting out and displaying all those fabulous details, all that texture, is the language of your art. And good for you, dammit. Go forth and do it. Between the covers of a book.

But remember Larry’s story … remember that even there, less can indeed be more.

BY THE WAY: I am compelled to assure you, dear reader, that I did not actually lift any lines verbatim from the script. I paraphrased, to create a representative example. No inappropriate plagiarism to see here. Move along.