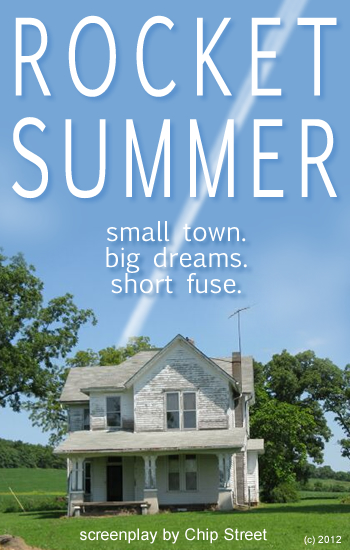 Another excerpt from the novelization of the Rocket Summer screenplay. “It was everything she’d imagined…”

END_OF_DOCUMENT_TOKEN_TO_BE_REPLACED

Another chapter down… now we’re at the point where a great trust has been broken. It was a delicate trust to begin with.

END_OF_DOCUMENT_TOKEN_TO_BE_REPLACED

Another excerpt from the slowly evolving project of converting a screenplay into a novel.

What these kids are doing  is dangerous. Someone could die.

So they’ve cobbled together a safety feature. But it needs testing… and none of them want to be the guinea pig.

END_OF_DOCUMENT_TOKEN_TO_BE_REPLACED

It’s time for a new excerpt of the slowly project of converting a screenplay into a novel.

So I may have been giving up too much information (spoilers) in the previous posts.

I’ll try to stop that.

These kids will do anything for this project of theirs… even get a haircut.

Why? One day you’ll be able to buy the book and find out…

END_OF_DOCUMENT_TOKEN_TO_BE_REPLACED

It’s time for a new excerpt of the slowly project of converting a screenplay into a novel.

Those who have followed this project from its inception know that the characters have had their genders reversed. Not in the context of the story, but as a practical point.

Originally, the lead boy was Charlie. He had a crush on Lacey, and was best friends with Davey. Davey had a big brother, Mike, who they had to invite into their summer project because he had a truck and a driver’s license. Charlie hated Mike. Not just because he was a huge jerk (he was) but also because Lacey had a crush on Mike.

During the editing process, the producers felt they had a better shot at selling the film if it revolved around a female lead. So Charlie became Lacey, Lacey became Charlie, and Mike became Darlene.

So Lacey’s problem is that she likes Charlie, but Charlie likes Darlene.

Darlene still needed to be all the things Mike had been: older, a badass, and handy with a wrench. And the object of someone’s desires.

Here’s my take on Darlene…

END_OF_DOCUMENT_TOKEN_TO_BE_REPLACED

Here’s the latest excerpt on the slowly progressing process of converting a screenplay into a novel.

Berta was a character that originally had a much bigger part in the story… she was inspired a bit by the storyline in Breaking Away, where the kid has to get a job at the local car wash. He’s derided by his pals for taking the job (and being responsible) and is so incensed by the whole thing that he quits before he even starts, punching the time clock (literally) and walking off before his first shift begins.

I always felt like that was an interesting story point, but that by having him quit right away, we missed an opportunity to see how the experience of working  might have affected the story.

Berta was my take on that… Lacey’s boss at the job Lacey hates. But I kept Lacey on the job, because I felt it was part of her maturation process. Through all the edits, Berta’s part has been mightily whittled down, but I’ve brought some of it back in the novel.

END_OF_DOCUMENT_TOKEN_TO_BE_REPLACED

The screenplay novelization of Rocket Summer is coming along… Here’s the latest excerpt.

END_OF_DOCUMENT_TOKEN_TO_BE_REPLACED

Time for another excerpt from my novelization of Rocket Summer. I feel pretty good about how things are moving along.

The trouble with Maggie and Dwayne:

END_OF_DOCUMENT_TOKEN_TO_BE_REPLACED

So things are moving along. I’ve spent the day writing and gotten a lot done.

I’ve decided to post an excerpt every few days… it’ll appear here, and on the Rocket Summer Facebook page as well.

The difference between Mom and Dad:

END_OF_DOCUMENT_TOKEN_TO_BE_REPLACED

So when eKidsFilms purchased the screenplay for Rocket Summer, I retained the Literary rights.

I was already partway through novelizing the screenplay when they purchased it, so it’s partway completed. I’ve sort of set aside the idea of converting the screenplay into a novel, but  now  I’m back in the mood.

Motivation? Hopefully the book can have some small success as a YA novel, and help generate interest in the film, when we’re able to finally get production done.

Now it’s about 44 days till my birthday, and I’ve got approximately 150 pages of novel to finish. That’s only an average of 3.4 pages a day. Given that the thing’s already outlined end-to-end, all the dialogue’s written (it’s a screenplay) I should be able to do this, right? Then another month to final polish…

Look out, Amazon, here I come!