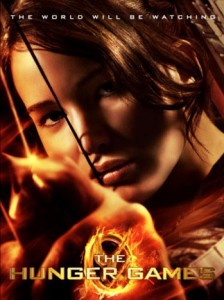 The Hunger Games movie review: Shaky cameras and low budget blues are saved by a strong premise and stronger performances.

Yes, it’s true, the Hunger Games Shaky Camera Effect does suck. But it kind of doesn’t entirely ruin the film.

It’s not just “hand held”. It’s like some palsied old man with tremors (like me) was holding the camera and then hired a guy to grab him by the elbows and shake him mercilessly.

And come on, if you’re one of those people saying it was just in the action sequences, shut up and be honest. The shaky camera isn’t exclusive to the action scenes. It’s used right in the opening sequences, in the most quiet and intimate of scenes, as Katniss soothes her little sister after a nightmare and helps her fall back to sleep… camera jittering and shaking like security cam footage of an earthquake.

Some folks say that it was a deliberate affectation designed to help hide the violence and maintain a rating accessible to The Hunger Games’ younger audience… and maybe that’s true (even though it was egregiously overused outside the action scenes). After all, there are brutal killings in The Hunger Games and they’re not terribly explicit.

But it’s not awkward and hard to follow just because the camera is shaking. It’s because the framing and editing are terrible.

The action sequences are buried under a cacophony of random out-of-focus hand held footage that’s framed in ways that make it impossible to tell what’s going on. Who’s winning the fight? Whose hand is that? Was someone just wounded? Who? What the hell is going on?

Any fight choreography or geography that might have helped organize the visuals into a coherent narrative, with jeopardy and escalation for our characters, and highlight events that impact plot, are completely lost. The only way to know who comes out on top in nearly all the fight scenes is by who’s still alive in the following scene.

It’s a shame. There’s a lot of good stuff making it to the screen — both in design and performance. And it just gets lost.

I will say this… I don’t know if it actually gets better later (I don’t think it does) but apparently I did get used to it enough that it didn’t ruin the film. I had the same experience with Dancer In The Dark. Almost turned it off. Glad I didn’t. (If you haven’t seen this heart wrenching, beautiful, brilliant film, do it. Now. Go. I’ll wait.)

I won’t spend too much time here other than to say that if you spend tens of millions of dollars on making a movie, there’s no excuse for special effects that look like a SyFy Channel monster-of-the-week movie. Not after you see what can be done in much smaller films like Monsters, or District 9. Or any contemporary TV “Event” series (Lost. Heroes. Terra Nova.)

Some of the shots look quite convincing… maybe most of them… then there’s the clunkers. The terrible fire suits (what a missed opportunity!) as they arrive in their awful green screen chariots, or the demonic dogs that look like they came from the final scenes of 1984’s Ghostbusters.

It wasn’t a lack of ability, I’m certain. It was a budget thing.

We can only hope that in the sequels (and there will be sequels) they pony up for some more consistent FX work.

This is a pet peeve of mine (and it could be that it’s better explained in the book — so correct me if I’m wrong) but I like my science fiction futures to be internally consistent. I just don’t get how a society with anti-gravity (no other way to explain the huge floating ships — they’re not truly hovercraft [as they’re called] nor are they any kind of ground effects vehicle) and the ability to apparently conjure living breathing creatures from nothing (the dog creatures that are generated out of nothing to chase down and kill the kids — essentially transforming one kind of matter [dirt? leaves?] into a lifeform) still depends on coal (it’s stated that District 12 is important because of its healthy coal deposits).

And the Capitol is built on a giant freaking hydroelectric dam, for crying out loud. Coal? WTF?

And little toy parachutes to deliver emergency supplies? Really? Not more of the established anti-gravity technologies that can steer, but parachutes that drift aimlessly and still land exactly where you want them? Blurg. That smacks of Hogwarts to me.

All of which are minor quibbles, and probably don’t bother 99% of the viewers. But they pull me out of the universe, and that’s disappointing.

The performances are at worst adequate, and at best really riveting. Lawrence as Katniss is strong and powerful and complicated and sexy. Hutcherson as Peeta holds his own alongside her, even though he’s hardly got anything to say for the first 20 minutes he’s on screen, and the camera loves him.

The supporting characters suffer from a lack of development… Harrelson’s Haymitch is given a three sentence origin story, but we really have no idea what drives him now (we could infer PTSD, alcoholism, guilt… but it’d be a guess). He’s fun to watch though. Banks and Kravitz do their best with what they’re given as Effie Trinket and Cinna, ticking the boxes that keep things moving along but again don’t really have a second layer.

More missed opportunities, especially with more than 2 hours to work with, and knowing that those characters will be important in the sequels.

Oh, and Book vs Movie

Yeah, don’t much care. The movie needs to stand on its own, and I shouldn’t be required to have read the book to appreciate the film. I don’t demand that movies based on books stick closely to the book when it comes to characters’ race, hair color, whatever. And I don’t care if they have to change up the plot to make the story fit on the screen, as long as they tell a good story and retain the core of the book’s philosophy, which Hunger Games seems to have done (unlike Percy Jackson).

I haven’t read The Hunger Games (yet) but my son is a huge fan of the books (moreso 1 and 2… he says 3 isn’t as good). He walked out of the theater pretty satisfied overall. He’s usually pretty critical of films made from his favorite books, but says this one held up well.

What It All Means

I like science fiction (it’s been my go-to genre since childhood). And I like dystopian futurism. I like the idea of this universe (even though it’s not entirely original… but what is?).

So in spite of all its problems, I still enjoyed The Hunger Games. An interesting premise, strong performances, and a genre that I’ve got a soft spot for combine to deliver a solid action piece that generates real stress and almost doesn’t feel 2 hours and 12 minutes long. I won’t pay to see it again, but I’ll watch it on NetFlix or cable when it rolls around. And I’ll see the sequel too…

…and cross my fingers that they’ve popped for a tripod.

7 thoughts on “The Hunger Games review: Strong performances win out over shaky camera”