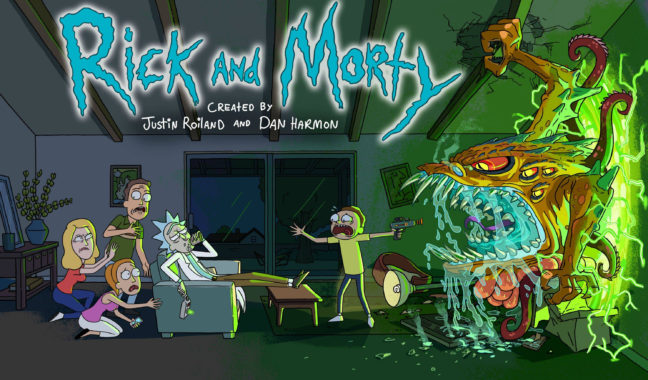 All right, so… much as I was late to the amazing “BoJack Horseman,” I’m a little late to the Adult Swim series “Rick and Morty.”

While it’s a bit more absurdist rimshot theater than Bojack, it’s a smart and interesting show that traffics in some fun scifi tropes with a wink and a nod, while occasionally dipping into some pretty deep and thoughtful dialog, plumbing a variety of philosophical themes, largely existentialism.

Rick is a brilliant, irresponsible, rude, inappropriate, offensive, hard-drinking mad scientist who’s moved in with his daughter, her husband, and their two kids: 14 year old Morty and 17 year old Summer. Rick takes Morty on crazy inter-dimensional adventures to alternative universes (that often function as metaphors for the more screwed up aspects of our own universe) and insanity ensues, with aliens and monsters and robots and all kinds of wonderful stuff.

In one episode, Rick and Morty manage to destroy the world (maybe our entire universe) and escape to another, where they find their alternative selves dead from an explosion.

In the episode “Rixty Minutes,” in that universe they’ve escaped to, Summer has discovered that she was the result of an unplanned pregnancy, and her parents (who were teens at the time) considered aborting her.

She’s understandably devastated, and is planning on leaving home… which is where Morty steps in with this exchange.

“I kind of know how you feel, Summer.”

“No you don’t. You’re the little brother. You’re not the cause of your parents’ misery, you’re just a symptom of it.”

“Can I show you something?”

“Morty, no offense, but a drawing of me you made when you were eight isn’t going to make me feel like less of an accident.”

Morty points outside, indicating a pile of freshly turned soil in the back yard.

“On one of our adventures Rick and I basically destroyed the whole world. So we bailed on that reality and we came to this one, because in this one the world wasn’t destroyed, and in this one we were dead, so we came here, and we buried ourselves, and we took their place. And every morning, Summer, I eat breakfast twenty yards away from my own rotting corpse.”

“So you’re not my brother?”

“I’m better than your brother. I’m a version of your brother you can trust when he says ‘don’t run. Nobody exists on purpose. Nobody belongs anywhere. Everybody’s gonna die.’ Come watch TV.”

I’m not the first to reference this passage… the Rick and Morty Wikipedia page quotes the last line, noting that it’s clearly (to some) a call out to Sartre’s “Every existing thing is born without reason, prolongs itself out of weakness, and dies by chance.”

But what I love about the passage in its entirety is that it illustrates a crisis that could only be derived from a purely scifi narrative… and that as all great dialog does, even when it’s a little on the nose like this, it reveals something about the characters and how they’re not just responding to, but evolving because of, the dramatic events that pummel them.

In other words, if we take the next logical step from Sartre’s treatise, the question is “what do we do with that information? What kind of hell is it to live every day knowing exactly that?”

In this exchange Summer reveals how the revelation of her birth makes her feel, she discovers that the people around her are living their own challenges (maybe greater than our own,) and both she and Morty plumb the concept that at any given moment, we’re nothing more than the sum total of our experiences and our reactions to them. And we have to then figure out how to live with that crushing awareness.

We even get a brief insight into their relationship, with the reference to Morty at 8… that he drew pictures of his sister is sweet, and charming, and a little revealing. It adds an extra level of historical emotional dynamic to this conversation. That maybe what used to work when they were younger and more naive will no longer cut it now that we know the truth of our place in the universe.

Even outside this absurd scenario, each of us is, at any given moment, a ‘different’ and hopefully ‘better’ version of ourselves thanks to our experiences in the world, and we will affect others and the world around us by virtue of the action those experiences drive us to take.

To get personal and a little sappy… Hopefully, I’m a better version of myself now, in this universe, because of the experiences I had in the alternate universe I call my past, and the things that I learned from them.

And that the whole exchange buttons with Morty’s “Come watch TV” is so perfect and sweet… because in spite of the insanity of the events he’s experienced, he just wants things to be normal in their comforting mundaneness.

When I stumble across moments in a show that make me pause and go “Whoa… I need to watch that again…” I feel the need to share. Even if I’m years behind the pop culture curve.

When you’re writing your characters, what do you know about what’s happened to them in the past (within or before your story) and how that’s made them who they are? How is the way they act now driven by their previous experiences, how have they changed, and how are they changing? How aware are they of that evolution? And how does that affect the way they respond to current story points, and the things they say and do to other characters?

Are your characters as complicated as you are?

There you go. Do with it what you will.