The following is excerpted from my Paranormal Activity review… it’s a portion of the post that I find myself referring to and wanted the passage in its own post for reference. 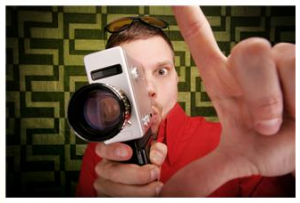 The “auto-chronicled narrative conceit” has its innate issues. It creates a single camera situation shooting in real time (Blair Witch circumvented this by having two cameras available, but didn’t really leverage it), with one character nearly always off screen, that does away with (or severely hampers) all the established film vocabulary tools… the wides, the two-shots, the over-the-shoulders, the singles, the cutaways, the inserts. All the film tricks that directors and editors use to subconsciously establish relationships between characters, to control tension and mood in dialogue exchanges, to communicate unspoken subtext, to control and structure our experience of the story into a narrative that works, are suddenly wildly restricted if not impossible to leverage.

In order to show us the story in its entirety, the camera operator has to carry the camera with him, and keep it running, and keep it focused, and keep interesting things in frame, all the time. Even when really scary, dangerous things are happening. Especially when really scary, dangerous things are happening. Those are the things that have to be in the shot, right? So he’s not helping his friends, not running for his life with the camera pointed at the ground, but he’s framing the shot.

And we can’t see that character’s reactions to anything going on, since he’s behind the camera (kinda like my mom, who is never in any vacation pics so we can’t prove she was there). Unless he turns the camera on himself and up his nose to tell that he’s “so so scared” — and then we’re not seeing the action, and neither is he. Tough to build empathy for characters who are essentially our guides and who we can’t see engaging in the adventure. They’re narrators, not participants.

Further, the story is shot (as presented in the narrative, not in the true production) in sequence. No flashbacks, no cutting away to other subplots, other characters, to the cops forming a plan, to the army launching a counter-strike, to worried family wondering where our camera operator is. The film has one point of view. One narrative thread.

It’s not impossible. But it’s hard. And it has to be done right. Which is why much of the time it fails.

Find out why it works in Paranormal Activity…

One thought on “the auto-chronicled narrative conceit”