Liz Maccie, studio reader, has a nice list of professional insights over at the BOSI site…

About two and a half years ago, I got the wonderful opportunity to become a “reader” for a studio, think mouse house. I continue to work for them under a freelance status and absolutely love my job.

Being a reader means you literally read materials such as scripts, novels, and teleplays. Then you write up “coverage,” entailing a synopsis of the plot as well as an analysis of the story elements.

Finally, you either recommend the piece for further consideration or pass on the material. All in all, it is a fantastic fun job that has made me, hands down, a better writer, simply because absorbing stories on a daily basis has helped sharpen my tools for defining story.

After reading literally hundreds of scripts, here are some tid-bits that may be of value to you on your journey to becoming a produced writer.

…and the script is available at their site (pdf).

When you look at a list of their projects — Blood Simple, Raising Arizona, Barton Fink, Miller’s Crossing, Fargo, The Big Lebowski, O Brother Where Art Thou?, No Country for Old Men, and Burn After Reading (and that’s not all of them) — it’s just stunning. I mean holy shit. They’re not just good movies. They’re not just really good movies. They’re experimental, brave, complicated, unique, and varied. They’re almost all brilliant in some aspect of the word, and certainly none are “average”.

My writing partner and I had a conversation many years ago, that went something like “Would you rather be Isaac Asimov and write 200 or more mediocre books, or Kurt Vonnegut, and write far fewer really amazing and challenging books?”

We both answered “Vonnegut” (and that answer of course assumes you’re capable of writing like Vonnegut).

The Coen Brothers are my screenwriting Vonneguts. They’ve got the goods. They are what I aspire to be. Just once.

Opinions vary on the value of shooting a trailer for your unsold screenplay. I’ve heard some folks (John Brown) state that it can’t hurt, and might help, the sale. I’ve heard other folks say it’s a waste of time.

If you fall in the first camp and think a trailer might be the thing for you, but don’t have the resources to do it yourself, I stumbled across Movie Trailer Makers, a team of filmmaking pros who specialize in kickass trailers of unproduced screenplays.

We have a team of international film makers with the talent, experience and resources to turn your script into a professional and entertaining movie trailer.

Our team are real movie directors who have worked on dozens of feature films, documentaries and TV series. We know what Hollywood are looking for and will help present your script accordingly.

And their reel is really impressive. There’s no doubt they can deliver the goods. But at what cost?

We’ve been thinking about making a trailer for our screenplay “Faeries” so I sent them a synopsis, just to get an idea of price. The reply was “…a typical non-animated trailer produced by us costs between $5K-$8K.” Well, that might be worthwhile for some, but for this project at least I can think of better ways to put 8-10K to work… shooting a short, jump starting a feature, fixing my car…

Which isn’t to say the service is not worthwhile. It’s just to say it’s too rich for my blood right now. 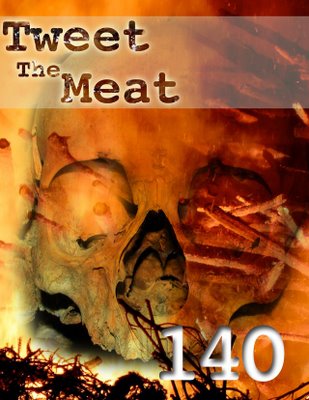 Yup, the Tweet The Meat submission I sold ran today. I promised I’d let ya know.

The kettle screamed. “Tea time,” she chirped, steaming pot in gloved hand. “Sugar?” He couldn’t answer with the funnel taped in his mouth.

Lemme know what ya think.

This is a great read, particularly as I’m just undertaking this next step myself (trying to find an agent or manager).

Part of the question I’m struggling with is whether it’s better at this point in my (nascent) career to go for agency or management… I haven’t quite decided on that yet.

But nevertheless, good essays on either process are always helpful.

This one, by Daniel Petrie, Jr. (BEVERLY HILLS COP, THE BIG EASY, SHOOT TO KILL, TURNER & HOOCH, TOY SOLDIERS, and IN THE ARMY NOW) includes not only his insights but those of a panel of agents from CAA, ICM, UTA and others. And in general, the consensus is that the old “query letter and SASE” path just isn’t what works anymore.

Let me assert that in twenty years of paid, professional experience in the motion picture industry (true, I include my summer as a movie theater usher to reach that figure) I have never heard the terms ‘query letter’ or ‘SASE’ used by another paid professional.

I’m not saying letters like that never work. Just that they almost never work. But wait — even if the odds are a million to one against, am I saying you shouldn’t even try? Yes. I am saying that. There is a better way. It’s more difficult, but better.

Check it out. It should both empower and intimidate you. But then, challenge is the father of all perseverance, yes? 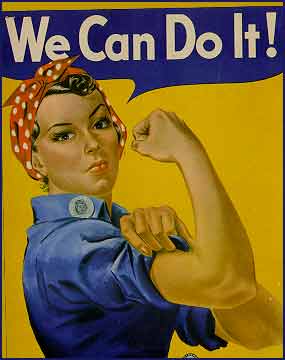 Some people are never satisfied. END_OF_DOCUMENT_TOKEN_TO_BE_REPLACED

We’ve already got one script being considered by a reputable production company. Now we”ve got two irons in the fire.

Grampa Was A Superhero is being looked at by a production company in the Midwest… East… Southeast… Hell, I don’t know. Where’s Tennessee?

Interestingly, this inquiry came to us mere hours after tweaking the logline and synopsis ever so slightly on InkTip. Correlation is not causation, but it makes one wonder. Hmmm. (That’s me, wondering.)

All the same caveats apply here as they do for the Faeries connection. No chicken counting prior to hatching. Likely as not nothing comes of it. But it’s the momentum that counts… nothing makes you more confident than knowing someone thought enough of your logline or synopsis to say “Sure, I’ll read that.”

But other than that, nothing.

I’m highly confident that one day soon we’ll look back at our naive excitement here and think “Ah, yes, those were the days, when a mere considerate nod from a mid-size prodco would make us swoon!”

But until then, I’ll take my jollies where I can, and savor the slightest attention.

Everyone who cares at all about us, cross your fingers. And tell a friend. 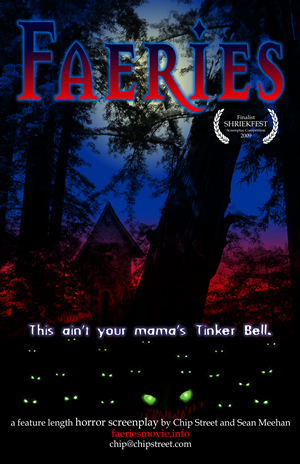 John August was interviewed on Making Of, where he talks about adaptations and choosing projects.

“My favorite genre of movies are movies that get made.”

Something you and I have in common, JA. 🙂

Well, that’s it! We spent a couple more hours beefing up some scenes, fixing some final typos, and tweaking the formatting in Final Draft to bring us in at a perfect 100 pages.

As always, we’ll continually refine the text… we’d like to keep looking closely at the dialogue and left margin, to assure we’ve got just the right verb here, just the perfect turn of phrase there… but it’s braces on a pretty smile… tiny incremental adjustments.

So we can officially release the logline and synopsis… we’ve given the script its own page here, and we’ve created a Facebook page for it as well.

Thanks to our readers for all the great feedback and encouragement. Now we’re off to find some good horror screenplay competitions, get it in front of a few good people in Hollywood, and find a producer who wants a fun, classic horror story with a unique twist — The Descent meets The Birds.

As Sean and I worked side by side most of the time, total linear clock hours: 125

Total calendar time (since we couldn’t get together as often or for as long as we’d have liked): 11 weeks

To see the blogs that chronicled “the writing of”, click here.