We’ve recently submitted the as-yet-unproduced Faeries horror screenplay to a few competitions, and just got the first set of coverage notes back. We think we did pretty well, and it only makes us more confident about the script. 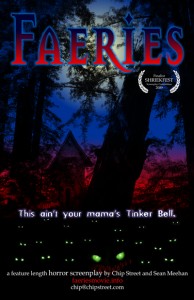 This is from the WildSound Screenplay Competition. We appreciate their kind words!

According to ScriptShadow, [one of] the best scripts ever written but never made is “Harrow Alley“, written by Walter Brown Newman in the 1960’s.

This is it folks. This is the one. Considered to be the best script that’s never been made in Hollywood. It was written in the 60s and has been optioned dozens of times. Yet because of its dreary subject matter and…aggressive length, it never made it in front of the camera. I’ve personally spoken to a couple of people who call this the best script they’ve ever read.

Harrow Alley takes place in England around the 17th century, or whenever the hell the Bubonic Plague was wreaking havoc. Although there are dozens of characters in the script, the two we focus on the most are Ratsey, a common thief who’s been sentenced to death, and Harry, an alderman for a town in London called Harrow Alley.

Let me know what you think.