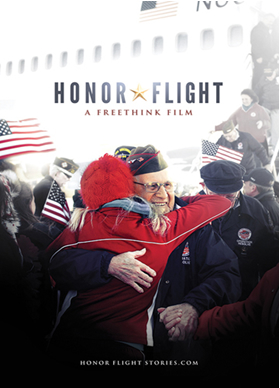 Honor Flight documents the effort to fly as many WWII Veterans to visit Washington DC Memorials as possible – and breaks a world record in the process.

Honor Flight is an uplifting, feature-length documentary about an American community joining together to honor World War II veterans one last time. The film follows a devoted team of volunteers as they race against the clock to send every WWII veteran on an Honor Flight to see the war memorials in Washington, DC. The more they do, the more their cause takes on a life of its own.

Throughout the day, these WWII veterans share their wisdom and war stories — sometimes for the first time ever. After the trip, the veterans often say it was one of the greatest days of their lives. For many veterans, Honor Flight represents their first visit to Washington, DC, and the last trip of their remarkable lives.

Honor Flight is a story about gratitude and freedom that emotionally moves people. The film inspires viewers to reflect on the opportunity they have been gifted. It prompts them to recognize the Greatest Generation, not just by saying “thank you,” but also by striving to lead lives worthy of their legacy.

From 4.5MM Trailer Views to World Record Attendance at the Premiere: Changing Lives

Honor Flight is a powerful film — the trailer alone garnered over 4.5 million views online in just two weeks. On August 11, 2012 the Field of Honor Event and Movie Premiere broke the Guinness World Record for the largest film screening in history (pictured below).

In 2010, the film’s Director, Dan Hayes started Freethink Media in Washington, DC with business partner Clay Broga. The filmmakers sum up the potential cultural influence of the film:

“Making Honor Flight has changed our lives. We’re in our late 20s and, like most everyone in our generation, we take a lot of things for granted. After hearing these veterans’ stories and experiencing the Honor Flight trip, we grappled with issues of gratitude, family and freedom in our own lives. And we’re better for it.

Through Honor Flight, we want to provide others with the same transformational experience. Knowing what the Greatest Generation did for us, at war and at home, we must strive to lead lives worthy of their sacrifices. We owe it to them, and to ourselves, to take advantage of the opportunities we have and remind everyone to reflect, appreciate, and defend the freedom that we so often take for granted.”
– Dan Hayes (Director) and Clay Broga (Producer)

A Bid For The Oscars

Dozens of film industry consultants have subsequently advised us that this poignant film has a strong chance to compete for the Academy Award’s “Best Documentary Feature.”

Stars and Stripes Honor Flight (SSHF) as a 501c3 charitable organization is seeking an Academy Award-qualifying run for the documentary film Honor Flight.  As a volunteer organization, we are asking for your support to ensure Honor Flight is seen by a broad population including students in school districts throughout Wisconsin and the USA.

SSHF and Freethink Media have developed a comprehensive marketing and distribution strategy (details available upon request) to bring Honor Flight to a large, national audience. A nomination for an Academy Award would ensure the mass exposure and reach of the film.

Visit the site, and sign up to stay informed of screenings; help spread the word to local press; and advocate for theatrical screenings in your area. Do your part to help honor these World War Two Veterans.