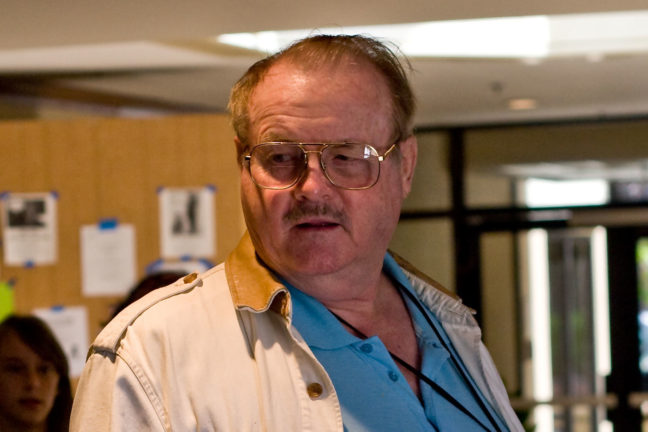 I’ve already shared the Jerry/Ringworld story that his sometime writing partner Larry Niven shared with me about a million years ago, over here in the “What Bad Science Fiction Can Teach Us About Writing Screenplay Description” post. Scroll down to “The Larry Niven Reference” if you need to catch up.

Way back when, for quite a number of years, I worked as Art Director on the board of CONTACT, a science fiction conference dedicated to balancing science fiction extrapolation with scientific accuracy. We worked with a bunch of NASA scientists, anthropologists, and sci-fi writers, including Jerry Pournelle, Larry Niven, Poul Anderson, C..J. Cherryh, David Brin, and so many others, and what we did was extrapolate alien life forms and cultures and future human societies, and then bring the two together to play out a “contact scenario” real-time on a panel in front of a live audience.

The folks we worked with were amazing, but Jerry was maybe the biggest personality, a kind of blustering narcissist with plenty of credentials to justify his confidence, willing to go to war for every hill he encountered.

Aside from Larry’s Ringworld story, probably my favorite story comes from the 1984 Contact conference, during which the alien design team created a creature called a “Squich.”

I’ll let the Contact website tell the story themselves (I think I was in the room but I didn’t actually witness the event) [link here]:

One hot topic was the Squich’s nervous system. The bipedal alien had long, triple-jointed hind legs, which, when extended, scissored out to more than twice the length of the body pod. Pournelle argued that locating the brain in the body would place it too far away to allow effectively fast nervous transmission to the hooves, which were critical not only for locomotion but also for communication (they drummed their feet and danced messages). One of [founder Jim Funaro’s] students, no youngster, a gentle man who had been a computer programmer since the days of Univac, disagreed. After the decibel level of the voices rose to three figures, he brought his foot down on Pournelle’s instep. As Jerry leaped up, the student said reasonably, “See. It doesn’t take that long.” Pournelle, never at a loss, grabbed a chair, held it out in front of him like a lion trainer, turned to me and yelled, “Funaro, call off your dog!”

I didn’t work with Jerry as much as I did with some of the other participants, but he and his big personality left a real impression on me.

I did read a couple of his books… his style was too tech heavy Golden Age for me, and I always found his partner Larry Niven’s work more entertaining, but I did really enjoy the titles he co-authored with Larry… Footfall, The Mote in God’s Eye, Lucifer’s Hammer, and Inferno (a retelling of Dante’s Inferno.)

So thanks, Jerry, for making that chapter in my life entertaining and memorable, for helping Larry be a more succinct writer on Ringworld, and for helping bring me some sci-fi titles that stay with me to this day.

Sorry I didn’t get to see you one last time.

Read more about Jerry here at The Verge…