Paranormal Activity sequel promises to out-boo its predecessor – will it succeed? 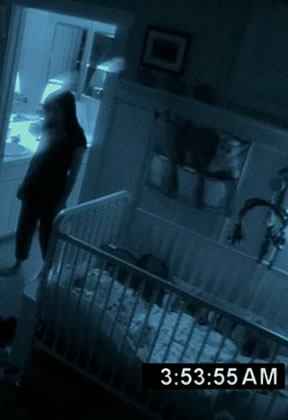 If you read my exhaustive review of Paranormal Activity, you know I was a big fan of (99% of) the film.

Paranormal Activity is the movie The Blair Witch Project wanted to be and Cloverfield didn’t even try to be. Discuss amongst yourselves the relative success or failure of The Last Broadcast, REC or its American remake Quarantine.

But we all also know that more often than not, sequels tend to disappoint (unless the audience’s requirements are low – Hello, Twilight).

For me, it usually seems as though the filmmakers didn’t really understand what it was that made the original great in the first place. They tend to think it was the low-hanging fruit, the flash, the gee-whiz.

“Gee, people really liked our first movie. Let’s figure out what they liked, and do it again!”

“Make it louder then.”

“Ooh, ooh, and it had those folding cars!”

“More cars, I say. And make them foldier. Foldier, shinier, and louder.”

But rarely does the conversation likely include discussions about why the story worked, what made the characters compelling and accessible, or why audiences connected with their relationships.

Paranormal Activity is particularly tricky to sequel, I think, because it used a narrative trope that’s especially troublesome for character development, and challenges basic film vocabularies. Yet it succeeded — for me,  it’s the film that squeezed the most storytelling success out of the auto-chronicled narrative conceit.

Until we get a chance to judge for ourselves, we’ll have to guess from the trailer:

Looks like we’ve kept the same house (a good thing), and we’ve introduced a dog (!) and a baby — a new victim who is innocent and vulnerable, and who viewers can’t fault for being too stupid to leave the house, or too bitchy to deserve saving. Assuming, of course, that the baby plays a significant role through the film and isn’t just eaten in the opening scene.

One of the things that worked so well in Paranormal Activity was the simple camera placement at night… We’re put in the omniscient position, we see impending danger before they do, and there’s nothing we can do to warn them.

With the baby, it’s a similar scenario, with a notch up on the creepiness… the baby IS watching what’s happening, but doesn’t know it’s in danger, and of course couldn’t run if it wanted to. Add the layer of empathy and maternal or paternal stress that we’ll be feeling as we watch, and (as a parent) I know I’m going to be having trouble breathing while watching this flick.

Is adding puppies and babies to Paranormal Activity 2 just reaching for the low-hanging fruit? Is it too easy? Is it exploitative?