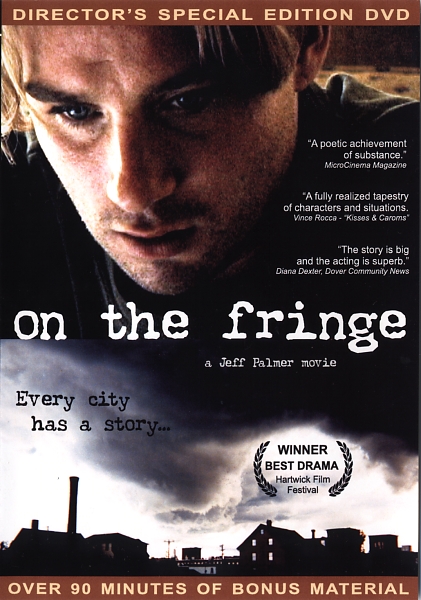 It’s also the kind of story that too few indie filmmakers attempt, at least at the microbudget level. It has no zombies in it. It has no blood. It has no guns. Well, okay, a little blood, and one really old man with a shotgun. But no zombies. Consequently, it may not be for all fans of microbudget indie film.

What it has is the stunning backdrop of New Hampshire in the Fall, an interesting cast of layered quirky characters, and a script that gives each of them an opportunity to tell their part of the story.

Now mind you, anybody can point a camera at New Hampshire in the Fall and it’ll be pretty. But not everybody can find the right frames, the right crane shot, the right off-the-track spots only locals know, and deliver it in the intimate way that Palmer delivers it such that his love and respect for the region glows even in the most mundane industrial back alley location. Make your locations look good… a skill Palmer has refined.

Although some of the deliveries are a little wooden, and the dialogue can get dense, Palmer does an admirable job pulling some fine performances from his actors, and everyone ends up looking good. At worst, there are some merely serviceable passages – at best, some truly touching deliveries. Nobody is embarassed. Make your actors look good, and get their best work. Again, a skill Palmer has refined.

Everybody pulls their weight, and I won’t take the time to discuss each of them, but star Dan Clay (Kurt) is the most polished of the performers, and the camera loves him. The shot of Clay that Palmer uses on the DVD and in the menus is one of the ‘million dollar shots’ that Clay better be using in his portfolio. And Matthew Magennis as Seamus delivers an endearing and understated performance – perhaps largely because his character is written as endearing and understated, and has minimal dialogue – but maybe that’s the toughest way to develop a character. And use of (apparently local) character Roger Barthelemy as gun-toting octogenarian Rufus T. Pilhauser is pure gold. Hell, that whole scene is gold… charming, natural, visually satisfying and quirky in all the best ways.

So the writing is solid, the acting is fine, the directing and cinematography are successful. Hey, even the music’s good. What’s wrong?

On the downside, the dialogue is heavy on the philosophy and introspection in a way that doesn’t always work for me. It made me feel like all the characters shared a similar voice, and that the writer’s own ideology was delivered not just through the macro vehicle of the story, but that every character was delivering it. This is why Clerks and the almost unwatchable Dogma (or pretty much anything by Kevin Smith) fail for me. Although in fairness, On The Fringe nowhere near reaches the self-satisfied under-grad musings of Kevin Smith… In that sense, although the dialogue drifts that direction, On The Fringe is more successful for me.

And there are a couple of slapstick comic-relief scenes that seem out of place. Sure, the film is tilling some heavy soil, so an occasional light moment is a good thing. Seamus wearing Funyons like eyeglasses during a hardcore game of Go Fish is borderline brilliant. But something about the style of a couple of comic scenes just feels out of place, like they’re from another movie.

Lastly, let it be known that Palmer is a multi-talented renaissance man — painter, photographer, writer, designer. The packaging for On The Fringe is attractive and professional, includes some cool little details, like a mini bumper sticker (”Find your niche and jive”), and a personal note from Palmer… and this special edition digitally remastered DVD has scads of behind-the-scenes goodies and other stuff (90 minutes – not all of which I’ve been able to view, since the guy I loaned my copy to hasn’t returned it yet). Looking at the attention to detail and commitment to vision that Palmer has dedicated to his five year effort to refine, remaster and repackage this project for DVD, this is clearly a very personal project that means something to the artist.

So what’s my Poster Blurb?
“On The Fringe is a visually rich, intimately human story delivered with artistic integrity.”

Given that this is the first review on this blog (congratulations, Jeff), I haven’t arrived at a Richter Scale of Judgment. No stars, clapping hands, rocketships, or penises to graphically show my recommendations. But I will say:

Buy It. Support thoughtful character driven independent film, and give Palmer the sheckles to make his next, even better movie.

Written, Produced, Directed, Shot, Edited, Gaffed and Costumed by Jeff Palmer.
“Ridiculous, I know. But necessary to get the job done.” – Palmer