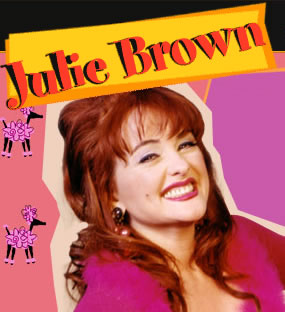 For those of you living under a rock:

“Julie Brown is one of the true Comic Queens!” -USA Today

Known for her outrageous comedy performances and songs, Award-winning Actress/Singer/Writer/Director/Producer/Gay Icon JULIE BROWN’s star-turn role as Medusa, in MEDUSA, DARE TO BE TRUTHFUL, a spoof of Madonna´s film TRUTH OR DARE, earned her a Cable Ace Award and the Writer´s Guild Award. Her follow-up film, ATTACK OF THE 5´2″ WOMAN, which she wrote, starred in and produced almost won her another Cable Ace Award for her song “Queen of the Ice.” Her fingers were crossed but inevitably she lost to her longtime rival, Barbra Streisand (she wishes).

For the big screen, Julie wrote and starred in the cult film, EARTH GIRLS ARE EASY. Her other career highlights include her role as the gym teacher in the movie (and subsequent TV series) CLUELESS; starring on the FOX Sketch show THE EDGE and guest starring on the HBO Series SIX FEET UNDER as the bubbly Sissy Pasquese. She is also frequently seen as a commentator on E!´s various entertainment and top 100 specials.”

Rocket Summer is a charming family drama that feels like a cross between Breaking Away and October Sky, with a hint of Stand By Me.

The script went on to garner a quarter-final placement in the Monterey County Film Commission Script Competition. Since then it’s been optioned for a total of two years, and is now back in my hands. I have high hopes for this script and am looking forward to finding a home for it.

“This story is touching on many levels. You are a talented writer, with a wonderful unique style.”
– 2004 Monterey County Film Commission Script Competition

If things fall together as I hope, Julie would be playing the role of Mercy, mother to teenage daughter Lacey, proprietor of the small town diner, and something of a den mother to the kids.

I’ll be sharing more, as I go through a rewrite on the script, and am working on putting together a shoot of some demo footage to help sell the project.