Inspired by the success of shaky hand-held cinematography like that in the recent Lion’s Gate release The Hunger Games, tripod accessory manufacturer Lenbrook LLC of Havordshire, North Carolina has announced the pending release of the “Shudderstik” fluid head tripod attachment.

“From Blair Witch to Cloverfield, Project X to The Hunger Games, shaky-cam technique has become fundamental to the vocabulary of the modern cinematographer,” says Brent Staunam, CEO of Lenbrook. “We’re thrilled to be able to offer these artists the tools to effectively and consistently find their kinetic voice in this new style of visual storytelling.”

Some say the practice had its earliest start in the Tom Cruise classic Top Gun. Popular legend has it that the director wanted more kinetics in the shots of fighter jets, and had a production assistant hold a drill against the leg of the tripod to shake it.

Inspired by the Top Gun story, the Lenbrook development team has created an attachment known as a ShudderStik®. The device bypasses any locking mechanisms on the stock tripod, and allows for the attachment of electric drills, blender motors, or egg beaters, and adds a dynamic quality to the shot, with a level of consistency and control not available to traditional hand-held shooters. 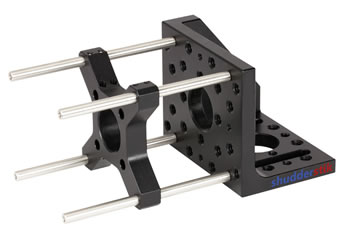 Technically known as a Kinesiatic shot, the trademark disorientation caused by the technique is considered a highly effective narrative tool. But it’s also been the target of much derision from many moviegoers, who claim the camera work in The Hunger Games made them physically ill.

Hunger Games director Gary Ross defended the choice in his Vulture interview. “I want to destabilize you the way Suzanne has and I want you to experience the world through Katniss’s eyes, and that requires a very subjective cinematic style, to be kind of urgently in her point of view, so that’s why I shot it that way.”

“For better or worse, the technique appears to be here to stay,” continued Lenbrook’s Staunum. “It’s not our place to judge. We’re committed to supporting the modern cinematographer any way we can.”