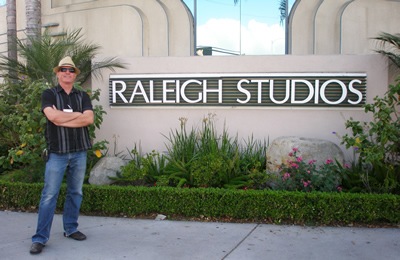 Let’s get the news out of the way right off the bat: Faeries did not bring home an award in the screenplay competition. But the good news is, the grapevine tells us that we were a very close runner up, and an unofficial judge ‘s favorite for commercial appeal and shootability. Moreover, we walked away with two producers interested in reading the script, and one well-respected studio reader itching to rep it to a few prodcos. So we’re still chuggin’ along.

But we did make it to Hollywood for the Shriekfest Festival, and win or lose, what a gas! Founder and fest director Denise Gossett, her most excellent husband and a bevy of dedicated volunteers put on a really fun, intimate, quality fest on the grounds of Raleigh Studios. Denise is a certified Scream Queen in her own right whose next project, the horror comedy Crustacean, is already in post-production.

(Raleigh is the location for a number of popular shows, and we were right next to the stage where they shoot Castle, which is my new favorite Murder She Wrote knockoff only partly because of what some might call my man-crush on Nathan Fillion, which started way back on Two Guys a Girl and a Pizza Place. Luckily, it was also right next to the first aid station, not that we needed it, but it’s nice to know. But I digress…).

My writing partner Sean made it down Thursday for the opening night party, and saw a few films on Friday evening. I arrived Saturday, and we saw a few more that night. Then there was an unofficial after-party Saturday night, hosted by Tammi Sutton at her production office. Tammi’s a Scream Queen as well, and a director perhaps best know for for Killjoy 2: Deliverance from Evil. Tammi throws a good party (thanks, Tammi!), it was a cool group of people, and we ended up hanging out till 3am… which I am just getting too old to do…

Sunday brought more movies, and the awards ceremony. While Faeries did not take home a prize, a lot of other  deserving folks got their due (more about them below).

We didn’t see all the films, but we skipped the shorts programs and focused on features.

Films I didn’t see but heard great things about: Lo and How To Be A Serial Killer.

Films I did see and thought really stood out: Dark House (fun, campy horror in the vein of Scream with a great turn by Jeff Combs), Nightmares in Red White and Blue (a nicely constructed documentary on the history of American horror — I found myself sitting next to two of the subjects, Mick Garris and Tom McLoughlin), and Evil Angel (a very polished flick that’s in the family of Fallen). There were a few other notables, but these were the ones that really stood out.

I just have to say that this was a really cool community of people… all lovers of the genre, sure, but more importantly just a super supportive group of creatives who really do root for one another, are completely open and accessible to hang out and bullshit, and who I’m looking forward to seeing again next year. There were more than a few recognizable names in the crowd (John Gulager was there most nights for you Project Greenlight fans) and plenty of fun to be had. Some of the films just aren’t my bag (not being a big fan of  buckets-o-blood slice-fests – more of a psychological horror/creature feature guy myself) but the people behind them all are great folks and I highly recommend checking out this fest next year for the socializing as much as the flicks.

Here’s the rundown on all the winners… congratulations to all… 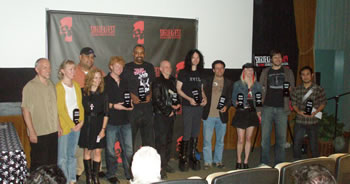 One thought on “Faeries at Shriekfest Film Festival”