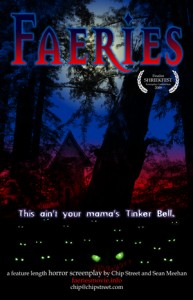 Amazon (yes, that Amazon) is launching a movie studio, and they just gave our horror screenplay Faeries a “consider”. What’s that mean? Not a lot, as near as we can tell.

First, here’s a brief primer on the history of the Amazon Studios deal. (I’m confident in my understanding of this history, but if I’m wrong about any of the details, point me at a source, and I’ll make a correction.)

How it all started

About a year ago, Amazon announced that they were going to become a movie studio, and produce their own content.

The model (generally) was to create a community website for screenwriters and filmmakers, and invite the writers to upload their scripts for the community to see and participate in: this is called a public submission. Then, other members could download and read them, offer their comments and suggestions, and rewrite them if they were so inclined, uploading the new versions as their own. (Yes, there is some protection for the original writer. But it’s confusing at best.)

While lots of wannabe newbies participated, there was also an outcry… from the professional community (Amazon was not Writer’s Guild [WGA] Signatory so was beholden to no guild requirements – thus keeping real professional writers far far away) as well as the more cautious element of the newbie community.

So Amazon changed things (a little) a few months in and allowed writers to disallow collaboration from other members, letting the original author keep some control.

From FAQ: “If you uploaded an original movie script, these project collaboration settings [open/permission/closed] only allow you to limit the addition of revised scripts to your project at Amazon Studios. They don’t limit other participants’ ability to add video content based on your script, and filmmakers and actors may not adhere to your script in making video content.”

Throughout all this, Amazon gains rights to your work the moment you upload it to the site. They essentially have an unpaid option on your hard work (45 days), as well as rights to any of the rewrites other members do, or any video assets from the community (members can make faux trailers, shorts, or even full length features based on your script and upload them).

If during the 45 day option period Amazon decides to pay for a longer option on the script, they’ll give you $10,000 and the 45 days becomes 18 months.

And if you yourself decide to take to heart any of the community feedback and upload an improved version of your ‘play [which assumes it’s public and thus you can get feedback], or if any other stranger on the site uploads their take on your property [which assumes it is set to “open” or “by permission”], the 45 day clock starts all over again. Even if the first 45 days has come and gone!

And if that’s not enough, once you remove the screenplay from the site, Amazon RETAINS THE RIGHTS to the associated content (other writers versions, their videos, etc). They can stream member videos based on your screenplay on their subscription VOD platform, plus make money off advertising. Forever. For free. With no payment to you.

Remember, no matter what sharing settings you choose for your screenplay, any other member can always make video derivatives of your screenplay. And:

“[Amazon retains] The right to make and distribute trailers based on it [the screenplay], up to 10 minutes in length, forever.” [from FAQ]

Smart business for Amazon. I just don’t see this as a good deal for writers, and neither did many other writers with a lot more experience and credits than me – like Craig Mazin and John August.

(For those of you not screenwriters, when your script is under “option”, it means the holder of that option has exclusive rights to develop your script with an eye toward eventually purchasing it, and in the meantime you can NOT submit to any other prodco, sell it to anyone else, or submit to any industry competitions. You give up your rights for the option period. Usually writers are paid for option rights… traditionally about 10% of a predetermined purchase price. Learn more about how options work.)

Fast forward a year (to a couple of months ago) and after negotiating with the writers’ guild in an effort to attract the professional community Amazon changed their model. Now, professional WGA writers could submit to Amazon, not through the community website, but through a guild sanctioned (and presumably more financially professional) back door.

What’s that do for the amateur community? Nothing. So they also changed their offering to the rest of us: Now non-guild writers can choose to upload a script as a private submission. Not visible on the site. Nobody but Amazon can see it. No other member has any rights to rewrite it or make video assets based on it. It’s private.

Under a private submission, Amazon has 45 days to review the script, and if they like it enough to want it, they can option it from the writer for $10,000 against a purchase price of $200,000. That’s only about 5%, but hey, the economy’s tough and these are unrepresented writers.

If they don’t want to option it, you get it back. Free and clear. All rights.

Now this IS a good deal for screenwriters. And a lot of other screenwriters, including professionals like John August and Craig Mazin, thought so too.

Of course, here’s the thing: If they DO option it, they can make it public on the site, invite others to collaborate on it just as though it had been a public submission. All the rights issues that came with public submission now transfer to your private submission.

But at least you’re getting paid. After all, if a big H’Wood studio optioned your screenplay for money, they also would bring on other writers to edit and polish, artists to do previz, maybe do some test shoots, etc.

We were not interested in a public submission to Amazon… way too many questions, and too many rights issues. But we liked the sound of the private submission. It’s a great opportunity to get your screenplay in front of a capable producer who’s willing to actually read it.

So we submitted our horror screenplay Faeries privately.

Amazon reviewed the screenplay, and chose not to option it. They did, however, let us know that they’d rated it a “consider”. (See this article by my Twitter buddy Michael Lee for an explanation of a “consider” rating on a screenplay.)

Nice. But that’s not all. They also offered to feature the screenplay on their “consider list“. Out of all the screenplays submitted, precious few make it to the consider list. To make it happen, all we need to do is click a button, and make our script a public submission – starting that 45 day option clock ticking.

Now, we could choose to make the script public and displayed on the consider list, and set the collaboration feature to ‘closed’. So nobody can write new version for Amazon to own rights to. But remember, the ‘closed’ setting only applies to written versions. Filmmakers COULD still make video content based on our script. And Amazon would own the rights to those videos. FOREVER. And they can distribute those videos as they please – on YouTube, or on their subscription based VOD platform, and collect ad revenue from associated ad content. Forever. For free. Did we say free? Free. Did we say forever? Forever.

What this amounts to is that while they didn’t want to pay for an 18 month option, they did want us to give them a free option for 45 days. And all that that implies. Exactly what we were trying to avoid by going with a private submission in the first place.

Why would we do this?

We appreciate what Amazon’s trying to do. And we may regret our ultimate decision. But there is no proven value in having our screenplay listed on Amazon’s consider list (as much as we appreciate their kind valuation). There might be someday… hard to know.

Are there other production companies unassociated with Amazon who are trolling the site, reviewing the consider list, anxious to buy? Maybe. Maybe not. There are other places we can post our script (and brag about our “consider” rating from Amazon) where we know producers troll for new projects: InkTip is just one. We’ve already optioned one script through InkTip (Grampa Was A Superhero).

Would we benefit from the feedback of amateur members who read the script on the site? Maybe, maybe not. Likely not as much as we would from the feedback we’ve already gotten from real contest readers and professional analysts.

While there’s no proven upside, there’s a known downside: the screenplay would be off the market for 45 more days, unpaid. And if we uploaded a revision based on Amazon’s notes (which, by the way, they won’t supply to us unless we go public), or those of other members, the 45 days would start over again.

And here’s our biggest concern. How much luck do you imagine a screenwriter will have down the line (once they’ve removed their screenplay from Amazon’s site) optioning or selling the screenplay to another production company, or making it themselves and finding a distributor, when there are ALREADY videos based on that screenplay in the marketplace, on an Amazon platform, in which the screenwriter owns no rights?

If Amazon just gave us the opportunity to post the screenplay to the consider list for 45 days as a good will congratulations, gave the community a chance to weigh in with opinions on the property, perhaps gave us notes explaining why they passed, but otherwise completely protected our rights by disallowing any derivative works (written, video or otherwise) we probably would have done it.

But under the circumstances, we can’t see an upside compared to the risk of one day being in competition with Amazon when we try to sell our screenplay to another producer.

But for us, it just doesn’t seem like smart business.

Amazon FAQ: Who can revise your screenplay?

Michael Lee on what a consider rating on a screenplay means